We present a novel design and fabrication strategy to produce architected core structures for use as the core in composite sandwich structures. A traditional foam core or honeycomb structure is lightweight and stiff, but susceptible to permanent deformation when subjected to excessive loading. Here we have designed an architected structure composed of arrays of hollow truncated cone unit cells that dissipate energy and exhibit structural recovery through buckling of their sidewalls and snap-back, respectively. We explore the mechanical response of these conical unit cells in terms of their buckling strength and post-buckling stability condition, and develop design maps for the same, by relating them to non-dimensional geometric parameters. A validated finite element model is developed and used to investigate the effect of these parameters. The structures presented here are printed using a viscoelastic material, that causes them to exhibit pseudo-bistability, or a time-delayed recovery. This allows the structures to buckle and dissipate energy, and then recover to their original configurations without the need for external stimuli. 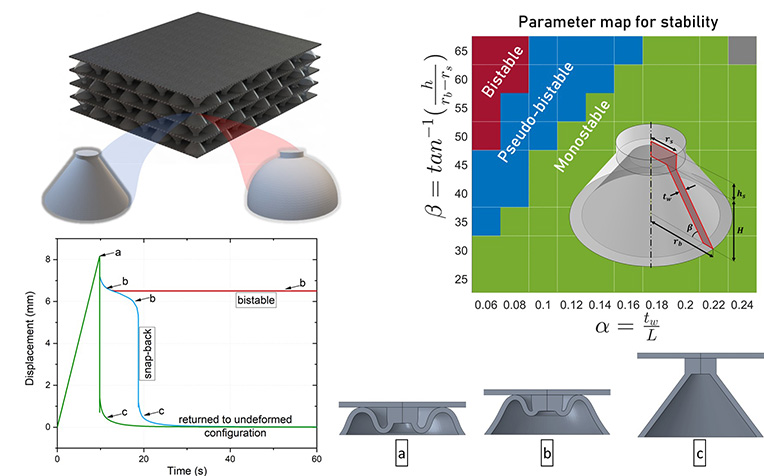 Polymer composites are inevitably exposed to moisture, which is known to drastically reduce their mechanical properties caused by moisture absorption and often accompanied with plasticization, weight gain, hygrothermal swelling, and de-bonding between fiber and matrix. Hence, it is vital to understand their moisture diffusion mechanics. Here, we elucidate the impact of fiber packing and morphology on moisture diffusion by developing and using computational models within finite element framework to evaluate moisture kinetics. We introduce a tortuosity factor for measuring the extent of deviation in moisture diffusion pathways due to impermeable fiber reinforcements, and further a relationship between tortuosity and diffusivity is established such that diffusivity can be calculated using tortuosity for a given micro-architecture. Tortuosity can be easily calculated for a given architecture by solving steady state diffusion governing equations, whereas time-dependent transient diffusion equations need to be solved for calculating moisture diffusivity. Hence, tortuosity, instead of diffusivity, can be used in future composites designs, multi-scale analyses, and optimization for enabling robust structures in moisture environments. 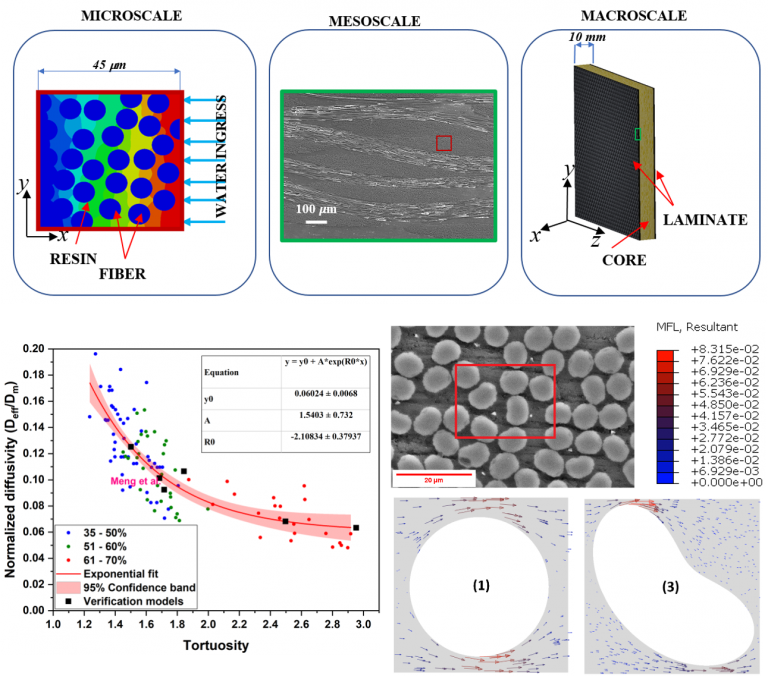