[Conducted in collaboration with Karthik Anantharaman at UW-Madison in the Department of Bacteriology]:

While impacts of abiotic factors like temperature, moisture, and ultraviolet light are well studied, little is known about the influence of naturally occurring microbial communities on the structural integrity of carbon fiber reinforced polymer composites. Here, we apply complementary time-series multi-omics of biofilms growing on polymer composites and materials characterization to elucidate, for the first time, the processes driving their degradation.

Recent interest in Arctic exploration has brought new challenges concerning the mechanical behavior of lightweight materials for offshore structures. Exposure to seawater and cold temperatures are known to degrade the mechanical properties of several materials, thus, compromising the safety of personnel and structures. Here, we investigate the low-velocity impact behavior of woven carbon/vinyl ester sandwich composites with Polyvinyl chloride (PVC) foam core at low temperatures for marine applications. The tests were performed in a drop tower impact system with an in-built environmental chamber as shown in the video to the right. Changes in impact responses due to extreme low temperatures (up to -60 C), under dynamic impact loading are elucidated. These not only have a detrimental effect on the residual strength and durability of sandwich composites, but also need relevant repair technique to be developed.

Fiber reinforced ceramic matrix composites (FRCMCs) have been shown to retain exceptional thermal and mechanical properties at high temperatures in inert atmosphere. However, FRCMCs like carbon fiber reinforced carbon ceramic matrix composites (C/C CMCs) degrade rapidly at temperatures as low as 450 C in oxidizing environments due to the conversion of solid carbon to gaseous oxides of carbon. With a rising demand for composite material structures to perform in extreme environmental conditions involving high temperature gradients, the prediction of oxidation damage is crucial in designing such structures. We present an integrated multi-scale experimental and computational analysis framework to study the oxidation behavior of ceramic matrix composites.

Cryogenic tanks are commonly used to store extremely low temperature fluids, like liquid oxygen (-183 °C), liquid methane (-161 °C) or liquid hydrogen (-252 °C) in their condensed form in order to generate highly combustible liquids. This type of tank, generally composed of different layers of insulators and some type of metal liners, is exposed to an extremely cold temperature in its interior and to ambient temperature on its external surface. A large temperature gradient across the thickness of the wall often cause differential expansion and contraction across the tank walls, resulting in an uneven expansion or contraction of the material. If the stresses caused by this differential expansion exceed the strength of the material, cracks initiate and propagate in the direction of least resistance. In addition, if the boundaries of the material do not impede crack propagation, this will ultimately cause the tanks structure to fail, resulting in an undesirable leakage that will consequently lead to the catastrophic fuel tank failure in the case of a rocket or spacecraft being launched into space. To this end, we are exploring hybrid textile composites with carbon fiber and Kevlar® fiber woven fabric as potential cryogenic tank materials with focus is on  investigating the influence of initial cryogenic exposure on the degradation of the composite. 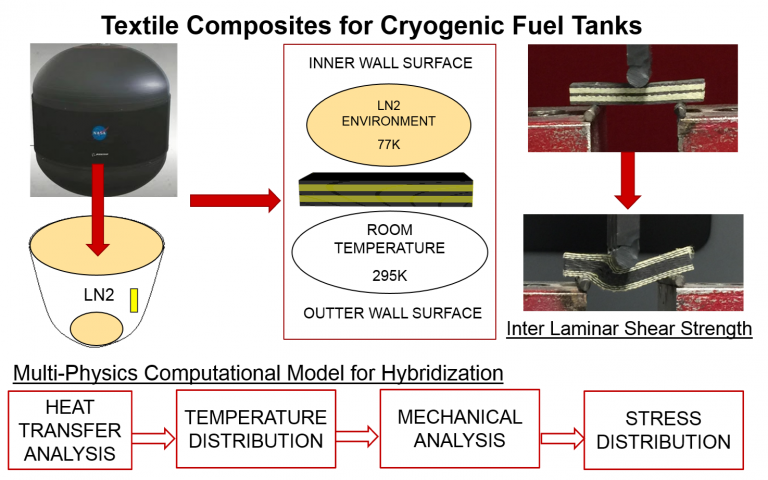